Well hellllllllllllloooooo there. How’s November been treating you so far? Getting all those good fall reads in?

Today’s Comicbook Corner is centered around the wild, weird, and completely disgusting, Chew by John Layman and Rob Guillory. By now you should know that I have a huge soft spot in my nerdy little heart for comics and novels that realize their mediums are limitless and just run with it. This is that and then some.

It mostly focuses on an FDA agent with the power to get psychic impressions from eating things, and his superiors discovering that he can use that power to solve crimes. At first it seems pretty straight forward, if not super, duper gross (he’s constantly forced to eat the physical remains left at crime scenes, be it spilled blood or a toe or whatever). He eats a gross thing, gets an impression, and tracks down the criminals involved. At first I thought it was going to end up just being a police procedural with this one wacky hook, but it doesn’t take long for the comic to take a sharp left turn from the expected. There’s all sorts of weird food powers and other bananas shit going on, including a lady that can make you taste the food she reviews, a man who can carve anything, ANYTHING, from chocolate, a weird immortal vampire who can absorb other people’s food powers by eating them, a former cock fighting champion chicken that’s turned into a government owned cyborg killing machine, and a weird, maybe alien or intradimensional plant thing that people use as a chicken substitute. It’s so fucked up you gals.

But! Luckily for us, it’s just as fun and entertaining as it is weird and gross. The writer and artist really seem like they’re having a blast making this one, continually outdoing themselves with the wild and zany shit that they come up with, while still making sure that there’s a story at the center of it. In between the eating of dead body parts and robot chicken killing sprees, there’s moments of real emotion and character development.

Recommended for anybody with a strong stomach, a high threshold for suspension of disbelief, and a propensity for fiction in which, almost always, you have absolutely no fucking idea what’s going on, but you’re having fun anyways. 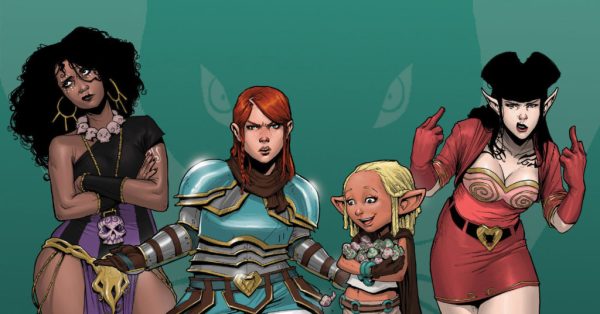 I once had this comic described to me as “the d&d game you and your friends wish you were playing” and while I wouldn’t go that far (my d&d crew is both great and good), I will say it’s the d&d story I wish I was writing. It’s bawdy, it’s fun, it’s fast-paced. The art is gorgeous and imaginative. The stories are clever subversions of regular fantasy tropes, self-aware tales told by a guy who obviously loves the genre just as much as you do (maybe more), but isn’t blind to its quirks and flaws.

The thing that really puts this comic up there with the greats for me though, is the characters. At first they seem fairly simple, ladies built by layering a modern archetype over a traditional fantasy one: the sensible friend/good cleric, the stoner/goofy rogue, the dependable friend/stalwart fighter, and the bad one/reckless wizard. But as the stories progress and they move through their (increasingly banana-pants) world, these characters open up and expand in really interesting, thoughtful ways. On the surface they may be all brash and ballsy and easy to read, ladies looking for the next drink/fight/fuck, but beneath they’ve got rich interior lives and complicated motivations for their actions. None of them are exactly who you think they are.

If you’re squeamish when it comes to violence and sex and cursing, or you’re in the mood for something dark and serious, this probably isn’t the comic for you. If, on the other hand, you’re down for a fast-paced, filthy, funny, balls-to-the wall comic, with some surprisingly keen insights on human nature and relationships, I think this might just be the one for you.

So I’m going to give something new a try. I loooove comic books, always have, but for some reason I’ve never really talked about them on here. They take up a pretty sizeable chunk of my reading time, they’re just as interesting to talk about, aaaand…I just don’t, for some reason. So let’s remedy that! Every now and then I’m going to do a Comicbook Corner and give you the run down of one that I’m currently reading or just finished reading or one from the back catalogue that had a big impact on me. They’ll be a little shorter than the usual post. If comics aren’t your thing you can just skip these posts (though I’d encourage you to give them a shot. It’s just reading accompanied by incredible art).

Consistently well-written. Weird, complicated, interesting, and always so, so beautiful to look at. Easily one of my favourite comics coming out right now, and the only one that I collect issue to issue. At first the world was so rich, so dense with history and information and intricate, interconnected relationships that I almost felt like I couldn’t get into it, like I was starting a story partway through. But the visuals were incredible and the writing hooked me in, kept me going, and I’m suuuuper happy I stuck it out. This world has such a complicated and complex history and Liu doesn’t feel obliged to spoon feed any of it to you (other than those fun little tidbits you get at the end of each issue). While at first I felt a little frustrated by it, over time, as I’ve began to understand the world a little better, its become one of the most satisfying reading experiences I’ve had this year. Besides, even though I may not always know what’s going on, I have always one hundred percent believed that these two do, and that they’ll get me there eventually. It’s really, really good.

Ps. I hate to hit the representation drum all the time (I actually don’t), but if that’s something that’s important to you in your art, this book has it in spades. Most of the characters (that aren’t animal people) are POCs and women, and the main character is a POC, a woman, and an amputee (as well as a fucking badass).

*Disclaimer at the top: This post, because of my undying and forever love for Peter Parker, is looooonnnggggg. Continue at your own peril.

You gals, you gals! They did it! They finally did it!

I’ve never really gotten on the nostalgia train. They’ve been aiming things from my childhood at me for the last ten years or so and, despite the fact that I loooooved that shit when I was a kid, still love some of it (I am an unrepentant cheesy comic buyer. Give me alllll the X-Men melodrama), I’ve mostly just let it sail right past. The ones that I have watched (most of them being comic book movies) have been bad to just fine. And that’s not to say that there are no good comic book movies out there. Logan was incredible! Deadpool is really fun! Captain America: Winter Soldier is really underrated as an action/spy thriller. But the characters of those movies weren’t a part of my childhood and they didn’t make me feel how I felt watching those stories as a kid (Logan was probably the closest, but Wolverine has never been my favourite member of the X-Men. I’ve always liked the big, sappy team stories better).

When I was growing up Peter Parker was my boy. I’ve talked about it on here before, but the early 90s cartoon version of him, with that terrible turquoise and blue striped shirt and super, duper 90s hair, was probably my first crush. But not only was I macking on his fine, mom-jeans-wearing ass, I also looked up to him. I remember watching him struggle and suffer to do the right thing, putting his relationships and his school work and his job in jeopardy again and again because of his desire to help people, and thinking “that’s who I want to be.” I idolized him. I pestered my mom into buying me Spider-man everything and climbed anything I could find (to her almost constant frantic dismay). I would’ve given my right arm to have a live action Spider-man movie.

So when I finally got one in 2002, I was really stoked. It was the first piece of directly aimed at me nostalgia-art and (even though at that point I was a teenager who refused to show enthusiasm for anything) I could barely contain myself. And after watching it, I remember telling people, somewhat frantically “That was pretty good, right? Like, I know it wasn’t perfect, but it was…okay. Like some of it was okay, right? RIGHT?!” I hadn’t got that feeling I remembered watching the cartoon as a kid, nowhere close, but I hadn’t hated it either (although I, to this day, can’t stand to watch Willem Dafoe in anything. He’s…such a bad actor, you guys. Awful). Over the next few years I had that experience again and again, with steadily diminishing returns, until eventually I stopped going. I haven’t seen the last X-Men movie and I won’t see the next one. I turned the Spider-man movie before this one off a quarter of the way through. I didn’t get what was so great about nostalgia. It seemed an awful lot like disappointment to me.

So I went into this one a little…nervously. If people hadn’t already hyped it up so much, I probably wouldn’t have even gone. I’m tired of watching big, dumb, loud action movies with the names of characters I loved when I was a kid attached to people who act nothing like them.

You gals, this movie knocked my fucking socks off. I’m usually a stone-faced bitch in movie theatres (I’m not sure why. I think it was just drilled into me at a young age that you’re not supposed to make noise/move/breathe when doing so could be bothering somebody else), even if I really like a movie you wouldn’t be able to tell until the credits have rolled and we’re talking about it after. If I absolutely love it, or something super clever happens, it might get a slight smile. This movie had me grinning from ear to ear the entire time. I laughed out loud, in a theatre full of people. I cried a little. And I left with a little nugget of joy in my chest, reminded of how much, and how purely, I used to love this kind of stuff as a kid. I feel like, for the first time, we had people who actually loved the character doing the movie. This was my Peter Parker, struggling and bumbling, constantly sacrificing what he wants to do the right thing. Failing a lot, but never giving up. And he was a kid, finally (And yes, I know, he’s twenty one and you’re all super relieved about it). He was awkward and insecure, but also sometimes over-confident in that way that only teenagers can be. Ugh, it was all just so good.

Okay, that’s probably enough nerd gushing for one day. Just go watch this movie, it’s really good. Even if you’re not a lifelong fan, there’s plenty there for you to enjoy.