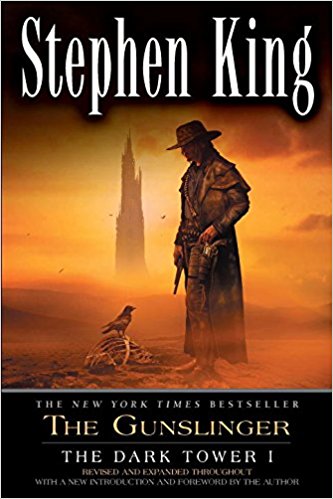 So….I just watched the trailer for the new movie coming out and….blegh. Which is a shame, because I had actually managed to get myself excited for this one. I love Idris Elba, and ol’ Matty McC is a really good casting choice for the Man in Black. I mean, I never really thought it was going to do the books justice (which is a really complicated, next to impossible thing for a movie to do. The only time I think I’ve ever seen a movie that I liked more than I liked the book was No Country for Old Men. I love that book, but the definitive vision of it in my head is, and always will be, the movie), but I was hoping it would at least be interesting and weird. Apparently, action-shlock, uber-hollywood, “I’ll save the world for the both of us, just after I figure out a cool new way to load my six shooter” was the way they decided to go. Double blegh.
It’s such a dumb, predictable, terrible direction to take this franchise. To keep the big and the action packed, but remove all the zany parallel world, sf/fantasy stuff. The things that I liked the most about all these books were how batshit weird they were. Even this first one, which adheres the closest to the old school tropes, a good ol’ western vengeance, has streaks of strange marbled throughout (like our hero does mescaline sometimes, just to put a little pep in his step), and it only spirals out from there. I can’t think of any other series that would be able to pull off having an Arthurian culture that uses six shooters instead of swords, nineteen twenties style gangsters, and doombots with explosive golden snitches and lightsabers in the same world. And with Stephen King at the helm, the journey may have been big and wacky and sprawling, but I always felt like I was in good hands. He may not have known from the getgo where exactly the story was going to go, but I always felt like he could get there.
These books are great, and fucking weird, and so much fun. By all means go and see the bland ass movie they’re making (and let me know if I’m wrong about it, because I’m giving this one the firmest of passes. And yes, I realize I have a big, bitter pill stuck in my craw about this, so I’m being more harsh than I need to be but I feel the way I feel), but please, please, if you’re going to do that, put a little time and effort into the books first. There’s a lot to get out of them.

PS. As a side note to all the entertainment big wigs that read this blog, when you have a series this big, this sprawling, MAKE IT A TV SHOW YA DUMMIES. There are tons and tons of Stephen King fans out there (even just the mild ones, like me) who would tune in to a Dark Tower series done right. And you just can’t collapse something this large into a two, or even three, hour movie. You’re setting yourself up to fail.

PPS. Did you guys hear about the fact that they’re trying to turn The Sandman into a movie? INTO A MOVIE?! AAARRRRRGGGGHHHHHHH!!!!!

I’m going to let ya’ll know, right off the top, that I have a particular and everlasting love of this book. I’ve reread it probably three times now, which is more than most other books, especially considering it’s a nonfiction (I don’t think I’ve ever gone back and reread a nonfiction book before).
The first time I read it was during my very first creative writing course. I was struggling, a lot, I’d hit a wall and I couldn’t seem to push through it. Nothing I was writing was good enough, even down to the sentence by sentence stuff, and I couldn’t seem to get anything on the page that I didn’t just immediately erase. If anybody that’s reading this has ever had that experience before, you know how defeating it can be. To have an idea that your insecurities, disguised as perfectionism, just won’t let you express. I talked to my teacher and he tried to guide me through it a bit, but when that didn’t work he lent me a copy of this book. I don’t know what it was about King’s writing, maybe it’s the matter of fact way that he talks about just putting shit down and editing it later, or the way that he lets you in to his life and the times when he’s had trouble getting back to writing, but it really helped get me over that hump.
The second time was another slump. I’d just gotten out of a bad relationship and I was having trouble getting things out again. I had ideas a plenty, but most of them seemed like hack trash. I was perusing a used bookstore, my normal pick me up activity when I’m feeling a little blue, and I came across this and remembered how much help it had been the last time so I picked it up. Again, even though I knew what was in the book this time, his steady hand and matter of fact explanations about the craft of writing, the bits and bolts of it, his assurance that you’re the only one hindering yourself when it comes to writing (but also, you should really never do this and this and this), really saw me through my slump.
Now it’s become my writing slump ritual. I feel sorry for myself for a week or two, I eat too many pastries and spend hours sifting through musty old book stores, and then I pick up this book, and read it, and remember that the only thing I need to do in order to write again is to want to.